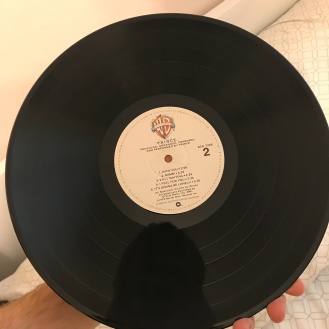 On October 7th, 1979, Prince released his self-titled second album, and in a way, truly began his career. For You didn’t sell the eventual million records that this one did, and “Soft and Wet” wasn’t the smash hit that “I Wanna Be Your Lover” was, even if it did only peak at #11 on Billboard’s Top 100. The album peaked at #22 on the Top 200, a stark improvement over For You‘s #163 position on the same list, proving to the label that Prince did have commercial appeal.

Which is all and well, because if Prince didn’t produce something that could be called “a hit,” then it was his ass. An ever-inflating production budget for both albums, plus a refusal to play ball with the label and allow Maurice White to help produce his debut album had annoyed them. The music business is still a business after all, and as enjoyable as the pop-soul, disco tinged music was on his debut, he needed to move units this time.

Prince feels very much like an improvement of For You. The falsetto and production is a little more refined, the song structures aren’t much different from the standard pop structures of his debut, however, the energy and sexuality is slightly ramped up. The lyrics on this are more of the same, as up to this point Prince hadn’t really strayed away from the basic ideas of wanting to be in love, or having great sex. However, he’s begun finding his way as a songwriter, beginning to take control of the driver seat and molding himself more into the man we came to know.

Prince had already shown he could write songs about soft cries for love, wanting to spend time together and even a concerned excitement of parenthood. On this album, he begins owning his identity; the pleas become more confident, sexier. You know the pause between “come” and “runnin'” on “I Wanna Be Your Lover” is intentional, and the song is better for it, as it connects the idea of Prince fusing love, sex, and a slightly unhealthy obsession with the woman who has his eye in this song (rumored to be about Patrice Rushen, but that’s for the tabloids). It got heavy airplay in the “urban” markets of the time, as I’ve read and heard many a young Boomer or older Gen-Xer retell their experience of skating around the rink, only to watch it be swarmed by skaters when the DJ dropped the needle on this particular single.

Dedicating too much time on the lead single does a deservice to the rest of this album however. Prince shows off his guitar chops in a similar vein to “I’m Yours” from his debut, this time ripping an insane solo at the tail end of “Why You Wanna Treat Me So Bad?,” a fantastic guitar-led track where Prince just has to know why this woman is being so unreasonable with her love, though Prince proves himself to be pretty unreasonable with his own demands for love on the other guitar-led track on the album, “Bambi.” The woman he wants in this rocker is a lesbian, and rather than respect that, he tells her on the chorus “You know it’s better with a man.” It’s not blatantly homophobic, but it does cast LGBTQ love as being inferior to heterosexual love, with the last verse stating:

“All your lovers, they look just like you/But they can only do the things you do/Come on baby, take me by the hand/I’m gonna show you what it’s like to be loved by a man.”

I see these lyrics, acknowledging the words and actions he displayed in later years, and have to come to the conclusion Prince was always, as much as he benefited from all his gender-bending, against LGBTQ relationships. That’s to say nothing of the actual music on the track, showcasing Prince’s guitar chops, and honestly, who doesn’t want to hear The Purple One shred?

Paced exceptionally well, I have to credit Prince with the exceptional pace at which he created these songs, as the album was recorded in a span of two months, from April 13th to June of 1979, beginning recordings for this album one year after his debut. Unlike For You, which had six of the nine songs already recorded as demos, “With You” was known the only known demo recorded beforehand. Understanding this was his first real impression with a wider audience, he succeeded in creating a well-paced, funky pop album. In 1979, he created himself a buzz, in 2017, he stands out in a big way from his contemporaries, especially as disco (and R&B/Soul by extension) started to die out as the decade ended.

Slow burners such as “When We’re Dancing Close and Slow,” “With You,” and “Still Waiting” are offset perfectly by funky uptempo pop tracks like “Sexy Dancer,” “I Feel for You,” which later became a hit (#3 on the Top 100) once Chaka Khan covered it, and the aforementioned rocker “Bambi.” The album never drags, funkin’ along at it’s own leisure, inviting you in and forcing you to tap your feet, sing, and dance along with the groove. It’s Prince, what else can I say?

This site uses Akismet to reduce spam. Learn how your comment data is processed.